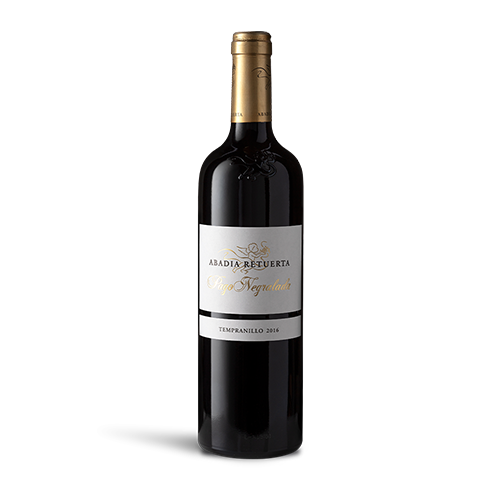 Pago Negralada comes from a single plot of Tempranillo planted in deep gravel soils inter-mixed with sand at the surface, and produce wines with a distinctive firm, tannic character.

Deep in color. On the nose we find a mixture of black and red fruit: plum, blackberry, raspberry that blends up with spicy notes of fine woods, smoke and light creamy notes of cocoa. In the mouth it is powerful, pure and complex.

This wine obtained several international awards and recognitions in the most prestigious wine tasting events. With its great ageing potential, this is a wine for the long haul, a wine with its roots firmly in the past and its sights set on future triumphs.

The Abadia Retuerta is a Spanish winery founded in 1996. The estate is situated just outside the border of the Ribera del Duero region in Spain's north central province of Castilla y León, near the village of Sardón del Duero. 20 miles east of the city of Valladolid, it lies in wine estates stretching from Tudela de Duero to Peñafiel known as “the golden mile”. Notably, it is just a few miles from Vega Sicilia, producer of Unico.

The climate is extreme continental and semi-desert, with hot summers, cold winters and average annual rainfall of 300 mm to 450 mm. The 54 vineyard plots take up 206 hectares: 146 of which is planted with Tempranillo, 40 Ha with Cabernet Sauvignon, 16 Ha with Merlot, 2 Ha with Syrah and 2 Ha with Petit Verdot.

The wine making facilities were designed by consulting oenologist Pascal Delbeck, proprietor of Château Ausone, who still works with the estate along with Angel Anocíbar.