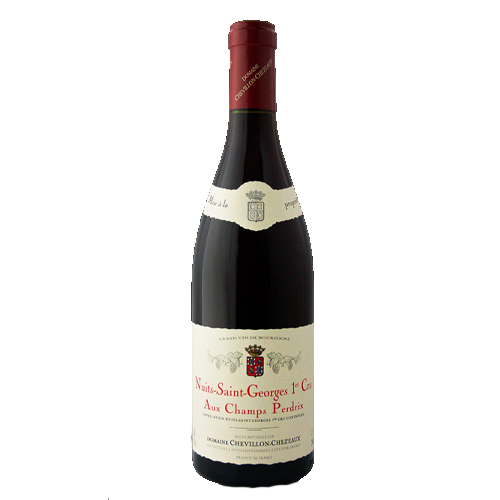 100% Pinot Noir from 0.35 hectare Premier Cru vineyards in the northern part of Nuits Saint Georges, toward Vosne Romanee, in Burgundy Cotes de Nuits. The vines are 50 years old on average. The brown soil is calcareous, very superficial and gravelly, with a loamy clay texture.

This Nuits Saint Georges Premier Cru displays a sustained and lively colour. A generous and dense fruitiness marks its youth. Blueberry, blackberry and blackcurrant, in compliment with raspberry and pear. An arrangement that seduces as much by its finesse as by its diversity. Fullness and volume, freshness and finesse of the tannins confirm an enveloping and rich structure. Best served around 15C with a roasted lamb, cote de boeuf, duck breast, or wash rind cheese like Epoisse or Langres.

The harvest is manual, 100% destemmed and crushed. A cold pre-fermentation (10-11 °) of 6-7 days is systematically carried out for better extraction and aromatic fixation. Vatting for about 21 days in open vats to allow Pigeage (operation which consists of pushing the solids of the grapes back to the surface in the fermentation juice for better extraction of tannins and anthocyanins). Entonnage by gravity in oak barrels. Aging in oak barrels for 12 to 16 months depending on the appellations with a maximum of 20% new barrels for Villages and Premier Crus to keep the expression of each terroir. The wines are then bottled if possible without fining or filtration.

The Domaine was created in 1887 by Eugène-François CHEVILLON, who inherited a few plots of vines from his father. Eugène CHEVILLON succeeded him. In 1946, his 2 sons, Georges and Maurice shared the family estate. In 1947, Domaine Georges CHEVILLON expanded with the acquisition of Nuits-Saint-Georges 1 er Cru “LES SAINT-GEORGES”. In 1963, his son Michel joined him on the Estate. In 1988, he created Domaine Michel CHEVILLON, which he operates with his wife Pascale. They will work on the Estate until their retirement in 2011. In 1999, their daughter Claire (6th generation), after studying at the Lycée Viticole de Beaune, joined them on the Estate to create an EARL. Philippe CHEZEAUX, her husband, joined her in 2000 to create the Domaine CHEVILLON CHEZEAUX which currently operates 8 hectares of vines all classified as AOC on 15 different appellations.

The cultivation of the vines is reasoned with tillage without weeding and respect for environmental rules. The work of the vines is oriented towards a short pruning and a severe disbudding to keep only a correct yield for a better maturity and quality of the grapes. Leaf stripping is carried out systematically for better ventilation of the grapes and vegetation and thus limit humidity in the vines and reduce diseases.

The winemaking method is based on respect for each terroir or locality and on the aromatic expression of Pinot Noir, Pinot Noir having a very wide aromatic palette, combining finesse and complexity. The wines sought after combine both finesse and elegance to be able to consume them when young, but also complexity and structure to allow them to keep for many years.