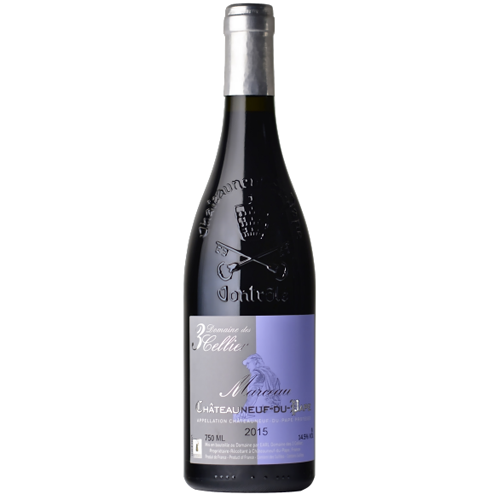 Deep ruby red color, dark, purple reflection. Aromas of black fruits, liquorice. The palate is deep, suave, with notes of citrus, blackcurrant, jammy fruit. The tannins are dense. This wine has a long persistence in the mouth.

Everything began in the middle of the 17th century, when the Boiron family, the ancestors of the Cellier family, owned a farm on the lands of Chateauneuf-du-Pape. At first turned to mixed farming, the family progressively specialized in the culture of the vine.

The story was going on for several centuries, until the day when Armand Cellier, came to harvest in the region and was seduced by Marie-Antoinette Boiron, the owner's daughter. After WWII, Marie-Antoinette Cellier gave birth to Roseline and Marceau Cellier, and the couple inherited the Boiron vineyard in the 1950s. The first generation of Cellier winemakers was officially launched.

In 1970, Marceau Cellier, following his father's example, took over the family estate. Having always lived on the estate, the vine had no secret for him. Annie Jacumin, his wife, was also a great help: coming from a family of winegrowers, she enabled the acquisition of 4 hectares of vineyard. The tradition continued until 2007, when the flame was once again passed on to the family's descendants.

The third generation of the Cellier family continues its path, between respect for ancestral techniques and out-of-the-box thinking.  Ludovic Cellier (elder), his wife Nathalie, and his brothers Julien (second) and Benoit (younger) officially created the "Domaine des 3 Cellier" in August 2007. Heirs to the knowledge of 10 generations of growers and benefiting from different skills, all four master the art of the vine and work to create wines of excellence.

With a 19-hectares estate and a success that has become international, the domain is now specialised in Chateauneuf-du-Pape, but also offers Cotes-du-Rhone and Vin de France.

The estate cultivates 13.5 ha of Chateauneuf-du-Pape with a large diversity of grape varieties. Here you can find Grenache, Syrah, Mourvedre, Counoise, Black Terret, Vaccarese (Brun argente), Clairette and Roussanne. However, it is common to find other older grape varieties of the appellation on our hundred-year-old plots: Cinsault, Muscardin, Bourboulenc, Picpoul, Picardan...

The plots are mainly distributed along the North-South axis of the appellation, with a larger block of about 3.5 ha on the Terres Blanches plateau (highest point of view in the North of the appellation).
The particular placement of our vineyard gives access to a large sample group of soils, allowing the production of wines with very pronounced aromatic and gustatory nuances.

The Cotes-du-Rhone appellation represents about 3 ha of our vineyard. All the plots are located in Courthezon. The classic grape varieties (Grenache, Syrah and Mourvedre) are planted on a sandy and silty soil.