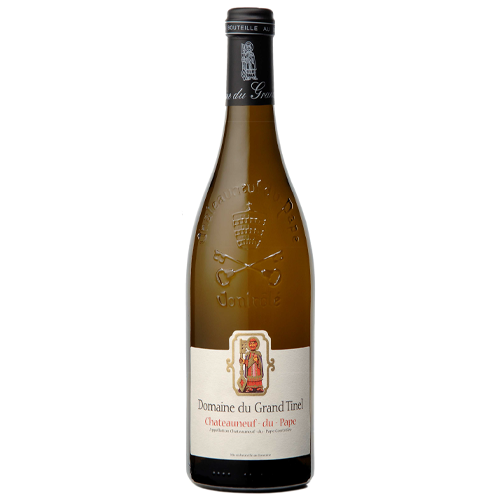 On the palate, it is a well-balanced dry white wine with a good volume, beautiful freshness and long finish. We can also note the buttered/toasted sides, brought by the ageing in barrels which is only adding to the pleasure of tasting.

Harvesting, entirely manual, is done early in the morning to keep temperatures cool. Systematic sorting is carried out in the vineyard. Transport to the cellar takes place under protection with dry ice to avoid any oxidation.

The grapes are pressed directly with a pneumatic stainless steel press. Selection of first juices then cold settling. The alcoholic fermentation is controlled between 16 and 18°C.

The Roussanne and part of the white Grenache (20% of the blend total) are vinified and aged in new barrels, the rest in stainless steel vats. The malolactic fermentation is not carried out to maintain maximum acidity and freshness.

Ageing 7 months on the lees with regular stirring of the barrels in the first weeks following the end of alcoholic fermentation. The assembly is carried out just before bottling.

The word "GRAND TINEL" in the 14th century, derives from the Latin "Tina“ which designates a barrel, but also a cellar; in Latin countries, this was the name given to the dining room.

The Domaine du Grand Tinel is the fruit of 2 families already known in the 16th century: Establet and Jeune.

In 1770, François Establet owned a vineyard in Chateauneuf Calcenier, called “the Popes”. In 1836, Alex Establet bought more vines in the Escalruins area. But it was his son, Georges Establet, who in 1846 acquired plots at La Gardiole which still represent the heart of the property today, with the Windmill.

In the 1960s, the union of the 2 properties was made by the marriage of Christiane Establet and Pierre Elie Jeune.

Today, their philosophy is perpetuated by Christophe Jeune and his two sisters Béatrice and Isabelle, with an extension of the buildings, offices, tasting room, bottling, storage of bottles and shipments in 2005.

The vineyard covers 74 hectares and is planted with vines of a ripe old age in different varieties, such as black Grenache (the true essence of Chateauneuf du Pape), Syrah, Cinsault, Mourvèdre, and Counoise for the red wines, and white Grenache, Clairette, and Bourboulenc for the white wines.