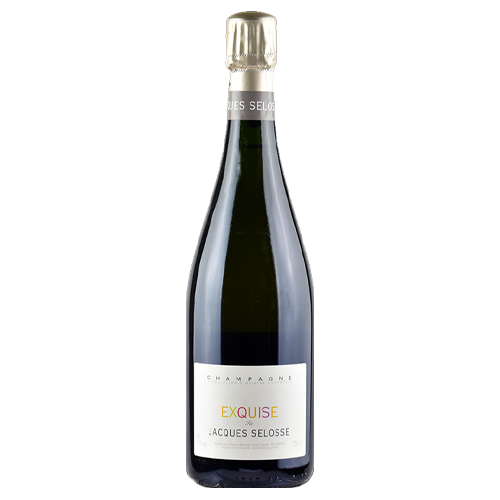 "The NV Exquise Sec is a Blanc de Blancs sourced in Avize and Cramant and assembles the vintages 2009, 2010 and 2011. Bottled in July 2012 and disgorged in October 2017 with a dosage of 24 grams per liter, this is a lovely, aromatic Champagne with cherry notes on the nose. Round and juicy on the densely woven palate, with sweet cherry flavors, this is a very aromatic, elegant, very well structured and complex Sec with an immersive finish. Tasted at the domaine in April 2018.

Jacques Selosse, Anselme's father, created Domaine Jacques Selosse in 1949 in Avize along with his wife. The domain still bears his name, though Anselme took over the estate in 1974. Domaine Jacques Selosse produces 57,000 bottles of Champagne every year from grapes grown and harvested on 7.5 hectares of vines spread over Chardonnay plots in the Côte des Blancs—Avize, Cramant, Oger and Le Mesnil-sur-Oger—and a few Montagne de Reims plots, dedicated to growing Pinot Noir, in Aÿ, Ambonnay and Mareuil-sur-Aÿ.

Anselme Selosse has managed to become a legend at a by no means advanced age; and more importantly an inspiration and mentor to stylistically innovative and environmentally-conscious wine growers over several decades, across France and beyond. It’s easy to forget how revolutionary were this grower’s terroir-centric approach, viticultural rigor, and laissez-faire attitude toward vinification when he emerged on the Champagne scene after completing formal studies and returning to his family’s estate in the mid-1970s.

Nor are Selosse’s wines about to stop being controversial, because not every taster will accept the complexity of long cask maturation including oxidative- and flor-influence in their Champagne; and as thought-provoking as these wines are, the Selosse approach guarantees that some of his vinous offspring will walk more on the wild side or present an aesthetically less satisfying whole than will others. “I haven’t got a check-list,” he remarks, “and neither has nature.”

Selosse is the iconic representative of an approach no longer considered unusual thanks to his example, and characterized by respecting one’s viticultural principles, including such as arise from concern for sustainability and integrity, striving to permit each vineyard and parcel of vines to most fully express itself; but – certain inspired flights of fancy no doubt excepted – imposing only minimal if any stylistic restraints on one’s wine, whether those based on perceptions of market demand or even personal aesthetic vision."