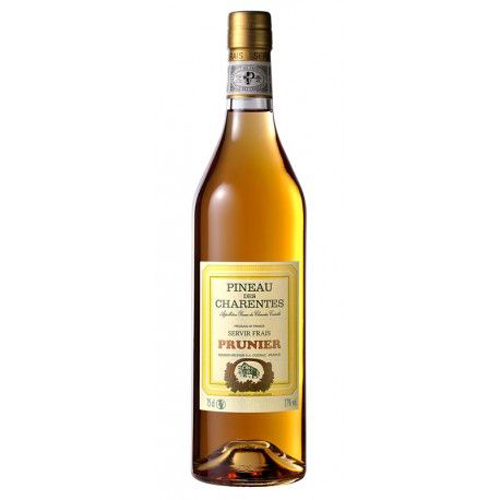 Appearance: Bright golden yellow. Nose: Rich and complex aroma, dominated by floral scents and particularly chamomile, touches of honey and dried fruits are also present. In the mouth: A supple and suave attack on the palate, both rich and fruity with notes of peaches, figs, lychees and passion fruit. The finish is long, juicy and silky with hints of wood that attest to its long maturation in oak barrels.

Pineau des Charentes is obtained by mixing the must, obtained by pressing grapes, with cognac at 60-72 ABV. The Cognac must be distilled the previous year. Pineau des Charentes is necessarily obtained after an assembly in French oak barrels for about 75% of grape juice and 25% of Cognac. After aging, the analysis should reveal an alcohol content of between 16 ° and 22 °, and a sugar content of 125g of grapes per liter minimum.

The designation requires that the grape must and the Cognac come from the same vineyard, the same terroir and the know-how of the men passed from generation to generation since 1589. Only after one year of aging the beverage is able to get the appellation Pineau des Charentes, but it still must be approved by a tasting committee appointed by the producers. Everything is done to guarantee consumers a high quality product.

Once bottled, the Pineau des Charentes will not evolve further; prolonged cellar conservation thus won’t provide any maturing but also won’t hurt him (provided you keep the bottles upright and away from light sources imperatively). After opening, the Pineau is preserved safely in the refrigerator, upright. It will be preferable to leave it at room temperature for a few minutes before serving.

Traditionally served as an aperitif, white Pineau des Charentes is also the perfect companion to a foie gras, or Melon/Cantaloupe.