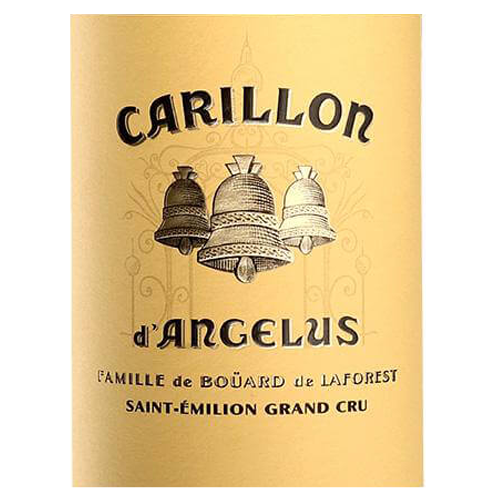 "Deep garnet-purple colored, the 2020 Le Carillon d'Angélus (a blend of 90% Merlot and 10% Cabernet Franc) rocks up with ready-to-go scents of plum preserves, blackberry pie and mulberries, plus hints of spice cake, aniseed and unsmoked cigars. The medium-bodied palate has lovely freshness and an approachable, soft texture framing the crunchy black fruits, finishing long and savory.

“This is a vintage we like a lot,” said Hubert de Boüard. “It’s like a super 2001. There are wild flowers—like violets—in the wine. It is a very harmonious vintage.”

“The first part of the season was very wet with high mildew pressure,” Hubert’s daughter, Stephanie de Boüard-Rivoal, CEO and co-owner of Château Angélus, added. “We are still in organic conversion, so this was challenging. The second part of the year, we were in drought. But we have clay across the vineyard. It worked like a tank of water. After two months with no rain, we were worried, so we dug in the ground in the vineyard. The clay two meters down was still wet and fresh!”

“The style of 2020 is—well, maybe some people pushed it too much,” Hubert said. “The skins were very thick. The risk was too much. A few wines have a little bit too much extraction. We kept the fermentation temperature low and were very gentle. We are getting more precision with the tannins. We wanted the least intervention.”

“We are looking to bring more pixels to the image of the wine,” Stephanie said. “The introduction of large oak foudres allows us to limit the oak impact and dissolved oxygen. We are aiming to age 60% in the foudres in the future. We don’t want anything filtering or hiding the fruit.”