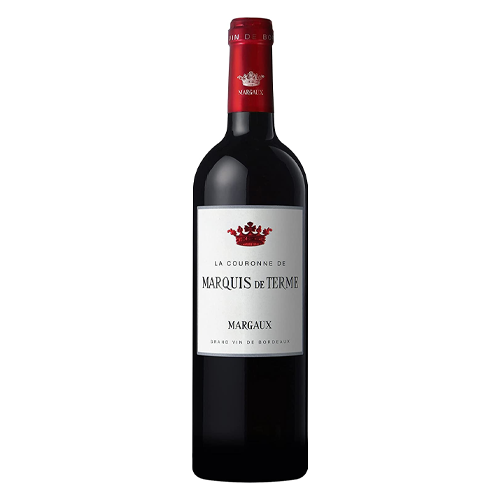 "The Château Marquis de Terme 2014 has a forward, fruit-driven bouquet that is not powerful but well-focused with nicely integrated oak. The palate is sweet and chewy on the entry: saturated tannin, good depth of fruit with cedar and smoke infusing the black fruit, easing down towards an easy-going, natural finish that suggests that it may be one of the more approachable Margaux wines of the vintage, though there is some new oak to be absorbed. That does not take away from what is a well-crafted 2014."

The estate owes its name to the first Marquis of Thermes, Paul de la Barthe, who was born in 1482. With the passing of time and a succession of marriages, by the end of the 17th century the title had lost its h. At this time the Marquis de Termes, Roger de Pardaillan de Gondrin, was a courtier under Louis XIV. Ruined, he died in 1704 with no male descendants. After various marriages, the title and the seignory were passed to François III de Péguilhan. When he married, his wife's dowry included land in Cantenac. The wine that was produced from these plots is recorded under the name of Marquis de Termes on Bordeaux's tax register from 1762 onwards. They were forced to sell the vineyard during the French Revolution. It then had a succession of different owners, including the Feuillerat family who, having been ruined in the 1929 crash, sold the property to the Sénéclauze family.

There are 40 hectares of vines. Since the arrival of a new director in 2009, Ludovic David, extensive renovation work has been carried out in the winery. The wines are aged in oak barrels (50% renewed each year) and then bottled at the Château in the classic Médoc style.