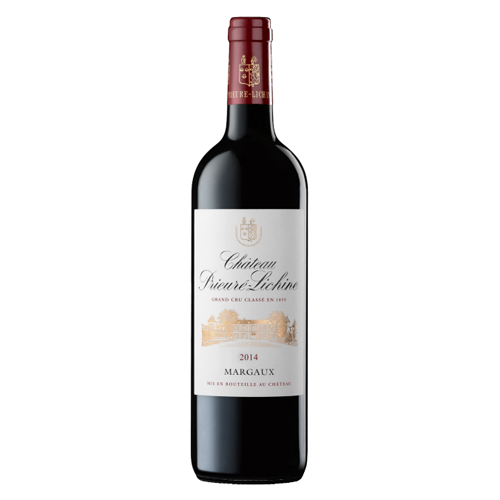 The Château Prieuré-Lichine 2014 has a rather shy nose at first, but with a few swirls of the glass it opens up to reveal blackcurrant, raspberry and cassis scents. The palate is medium-bodied with fine tannin, lighter in style than other Margaux, but elegant and focused, the finish very harmonious with assiduously integrated new oak, very fine tannins and precise, complex aromatic expression showing floral, fruity and spicy notes.

The Priory of Cantenac was founded during the Roman era by the monks of the Abbey of Vertheuil. By now in the hands of Bordeaux négociant Durand Delains, Prieuré was promoted to 4th Classified Growth in the 1855 Bordeaux Classification.

Having bought the estate in 1951, Alexis Lichine renamed the property Château Prieuré-Lichine in 1953. This period was to herald the renaissance of this Margaux estate. A peerless winemaker and a tireless champion of the wines of Bordeaux all over the world, Alexis Lichine, the Pope of Wine, died at Prieuré on June 1st 1989.

After a half a century of close ties with the Lichine family, Château Prieuré-Lichine was acquired by the Ballande group. Under the new owners, the estate set its sights firmly on the new millennium, continuing its path forward, and ever faithful to its long tradition of hospitality.

In 2013, the technical facilities were completely overhauled and a new, redesigned vat room was inaugurated. The harvest reception area was modernised to include gravity-flow in the vat-filling system with 34 new vats, 20 of which were tulip-shaped. Their different capacities now enabled even greater precision in plot selections.

Château Prieuré-Lichine is a jewel of the Margaux appellation. Its wines express the very essence of a world-famous terroir.