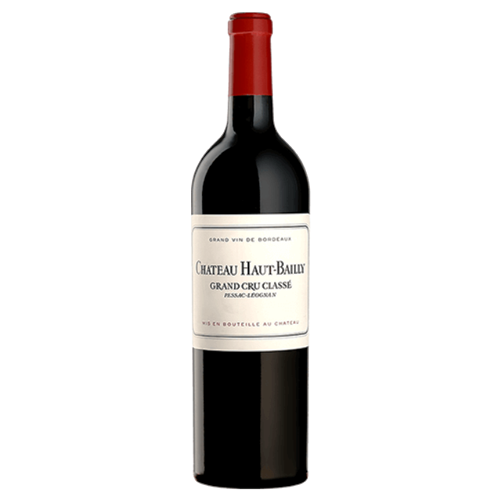 "Light, fresh, bright, forward style of wine, with a center of sweet, red fruits, herbs, earth and tobacco. You can enjoy this already open wine over the next decade or so, while waiting for the bigger vintages to come around. The wine was made from blending 64% Cabernet Sauvignon, 34% Merlot and 2% Cabernet Franc."

In 1998 Robert G. Wilmers, a Harvard-educated American banker, and his French wife, Elisabeth Wilmers purchased Chateau Haut Bailly from the Sanders family. Within a few years, thanks to their spare no expense attitude and the desire to produce the best wine possible, the wines have never been better at the property.

The terroir is gravel, sandstone, and sand over limestone soils. The sandstone in the soils holds a large number of petrified fossils, which adds to the wine’s unique character. The vineyard is in one large block of vines, which is only separated by a small road in the vineyard.

On average, the vines are 35 years of age. The vineyard is planted to a vine density of 10,000 vines per hectare. Not many people know this, but 15% of the Haut Bailly vineyard, equal to almost 4 hectares has vines that are more than 120 years of age! These are some of the oldest vines in Pessac Leognan, as well as in all of Bordeaux!

Inside those 4 hectares of very old vines, there are plantings of all six of the major grape varieties used in Bordeaux, Cabernet Sauvignon, Merlot, Cabernet Franc, Petit Verdot, Malbec, and Carmenere.