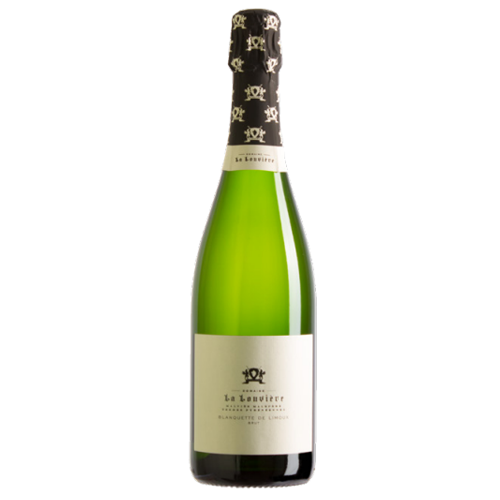 Little sister of our Crémants, our Blanquette is a blend of Mauzac and Chardonnay, varieties typical of our region.

The very calcareous soil in the vineyards that surround the historic town de Limoux contributes to the beautiful development of these white wine grapes. The winemaking method traditional is identical to that used in Champagne and was discovered by the monks of the Abbey of Saint-Hilaire, near Limoux, in the 16th century.

Wine of pleasure, drink it around 10C on its own, or with finger food, canapes, it can also accompany very pleasantly clams and shellfish... The Blanquette de Limoux sparkling wines should find a place of choice during all your festive occasions.

According to folklore, wolves gathered on the foothills of the Pyrenees in the south of France to survey the countryside and pick up the scent for the hunt. Our vineyards now flourish on one of these ancient gathering sites for wolves – La Louvière.

The Domaine La Louvière is conscious of its responsibilities towards our environment, whilst striving to produce the best possible wines. This is why we are committed to employing strict organic practices within our production in order to produce some of the best quality organic AOP Malepère and IPG Pays d'Oc wines you'll find.

Not only does the Domaine La Louvière abstain from using chemical fertilisers and pesticides, we also use natural remedies to bring life back to the soil and encourage bio-diversity. We have our own onsite worm farm and insect hotels, for instance, and make use of Effective Micro-organisms (EM) which bring a natural and healthy balance to the soil system.

Our ecological commitments don't stop there either. We are also extremely careful with our use of water. We recycle this valuable resource wherever possible and use flow restrictors in all of our water outlets to ensure we don't use more than we really need. To round everything off, our winery is equipped with solar panels to gain as much energy as possible from the 300 days of sunshine we are blessed with in the Languedoc each year.

In the last few years, a small and exclusive wine-growing region has begun to gain a remarkable reputation for its high quality vintages - The AOP Malepère area, just south of historic Carcassonne.

Situated in the thousand-year-old cultural landscape of the Languedoc in the south of France, with its hot and sunny climate, this exclusive region includes 39 communes laid out before the gradual ascent to the majestic Pyrenees.

In this special terrain, the vines' roots have to fight their way through a rocky ground, full of “bad stones” (the “mal pierre”) to find water. A struggle which helps make wines of true greatness and elegance.

Apart from its specific climatic conditions, what also makes AOP Malepère wines so special is their blending of typical Mediterranean grape varieties with the classic ones from Bordeaux, such as Cabernet Sauvignon, Cabernet Franc and Merlot.

These noble grapes rarely thrive in the heat of the Mediterranean coast, yet prosper particularly well in the Malepère's particular micro-climate.

Merlot is the dominant variety used for AOP Malepère reds, whilst Cabernet Franc is predominant for the rosé varieties. The other five authorised varieties are Cabernet Sauvignon, Cinsault, Malbec, Grenache or Lledoner.

Klaus Grohe, having been entranced by the charm of the Malepère region, acquired the Domaine La Louvière in 1992.

Aided by his four sons, he set about transforming the winery and developing La Louvière into a distinctive international brand.

Aware of the undoubted potential of the vines to produce highest quality AOP Malepère and IPG Pays D'Oc wines they set about their business. Although devout to traditional wine-making methods, they also employed the best modern technology, where appropriate, whilst adding a new efficiency and rigour to the operation.